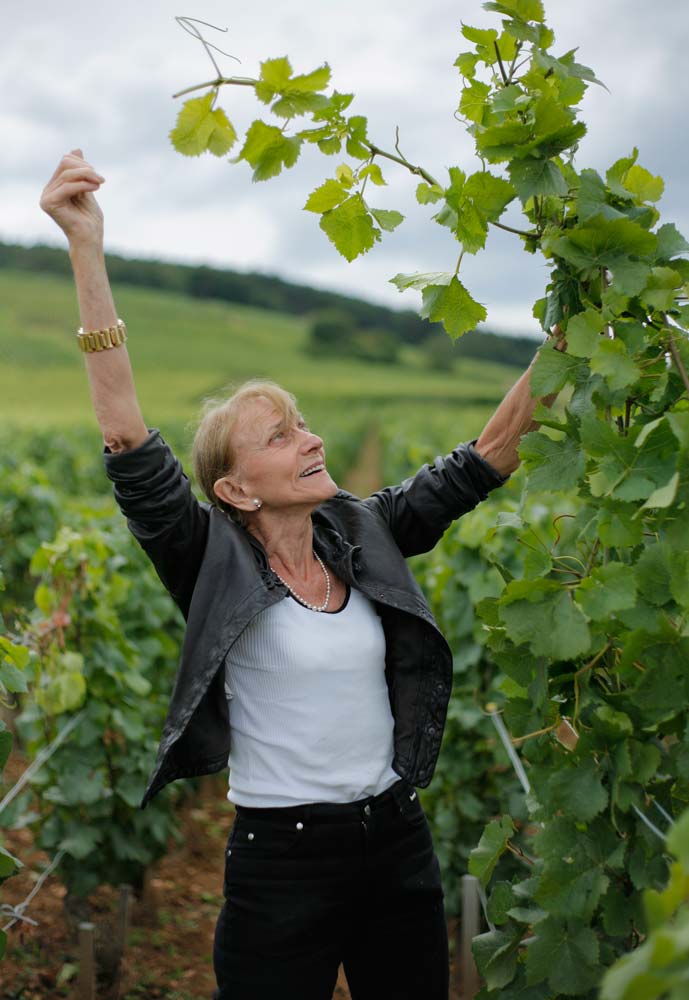 Maison Leroy has been crafting magical wines since the mid-19th century and is without any question one of the top three producers in Burgundy. The Maison is the original side of the Leroy business with which this royal family of Burgundy built their stellar reputation; the Domaine followed later.

Leroy’s motto is “Guardian of great wines”, but this simple-sounding phrase belies the lifelong vocation, dedication and exertion that Lalou Bize-Leroy has given to the creation and perpetuation of these truly magical wines of unquestionable reputation. In the words of Robert Parker Jr. in 1997: “Because she is a perfectionist, and because she has had the courage to produce wines from low yields and bottle them naturally, without fining or filtration, she has been scorned by many Burgundy negociants… Not only are they jealous, they are frightened of Bize-Leroy”. And since the Leroy holdings comprise 9 Grands Crus and 8 Premiers Crus, including land in Musigny, Richebourg, Clos Vougeot and Chambertin, amongst a throng of other superb Chardonnay vineyards, their wines’ world-renown is no surprise.

Lalou Bize-Leroy joined the family business, in 1955, the fourth generation of a family who, with savvy and tenacity, had built up a successful wine business incorporating the Maison Leroy and the Domaine Romanée-Conti. She became President-Directeur General en 1971. With great devotion and a lot of work, through constant tasting, she undertook to understand the essential characteristics of each “terroir” from each vineyard of Burgundy. For Maison Leroy, still today, she searches unceasingly to purchase the best wines, and for her the best is always yet to come. Furthermore, each week, she would accompany her father to Domaine Romanée-Conti of which she became, along with Aubert de Villain, Co-Gerante from 1974 to 15 January 1992. Maison Leroy distributed Domaine Romanée-Conti’s wines world-wide (except the United States and Great Britain) until 15 Janaury 1992.

Takashimaya, owner of luxury department stores in Japan, distributor of wines of Maison Leroy since 1972 in Japan acquired shares in Maison Leroy in 1988 thus facilitating the acquisition of vineyards of Domaine Leroy. Starting in 1966, Madame Leroy organized at her home, the Domaine d’Auvenay, prestigious wine tastings with the most well-known wine writers, critics, sommeliers and restaurant owners. At this time, in the late 1960s, this tradition was unusual and completely unique. Since through the years it became more and more difficult to find growers with wines that met the strict standards worthy of the Maison Leroy label, Bize-Leroy made the decision to expand Maison Leroy’s own vineyards. In 1988 she founded Domaine Leroy by purchasing, for Leroy, the estates of Charles Noellat at Vosne-Romanée and of Philippe-Rémy at Gevrey-Chambertin. In total Domaine Leroy now has 21 hectares, 99 ares, 66 centiares. She immediately began biodynamic cultivation on all the vineyards. From her profound belief that everything is alive: the soil, the grounds, plants, “…as alive as animals and humans…”, she immediately stopped using any products with synthetic chemicals on the vines. From September 1988, all the vines are completely and entirely cultivated under biodynamic principles. Biodynamic farming—which is not simply a farming method or a trendy commercial practice, but a holistic system, from beginning to end–does not allow any chemical fertilizers, herbicides, insecticides, or pesticides (according to Lalou Bize-Leroy, “all these things kill the life in both the plants and the soil”). Biodynamic farming views nature as a holistic interconnected system; it introduces and incorporates the knowledge of astrological and cosmic influences and its effects on the vines in order to care for them, repair the soil, work the soil, for the care given to the vines all year long, and for the care and methods to create the wines and ultimately until it is put in the bottle at Vosne-Romanée.

Jasper Morris MW: “Lalou Bize-Leroy has 23 hectares of vines, mostly Premier and Grand Cru classified. In the vineyard Lalou practises biodynamism as well as severe pruning and crop-thinning. The result is ridiculously low yields. Domaine Leroy is blessed with a heritage of ancient vines, in part because Lalou Bize-Leroy never grubs up and replants. Instead she replaces individual missing vines, from her own cuttings, but never too many at once in a given vineyard. These old vines combined with her training and pruning policy, restricting the bunches to just four per vine, explain in part the concentration of Leroy wines. The average yield across appellations and vintages at Domaine Leroy is around 16 hl/ha, according to Lalou. In the cellar there is no winemaker (vinificateur) nor oenologist, André Porcheret not having been replaced when he left after the 1993 harvest. The grapes are of such quality that they do not need a winemaker! After rigorous deselection on the sorting tables, which employ as many people as there are pickers, the grapes are placed, stemmed and all, in wooden fermenting vats. After fermentation the wines are matured in new barrels from Cadus and François Frères.