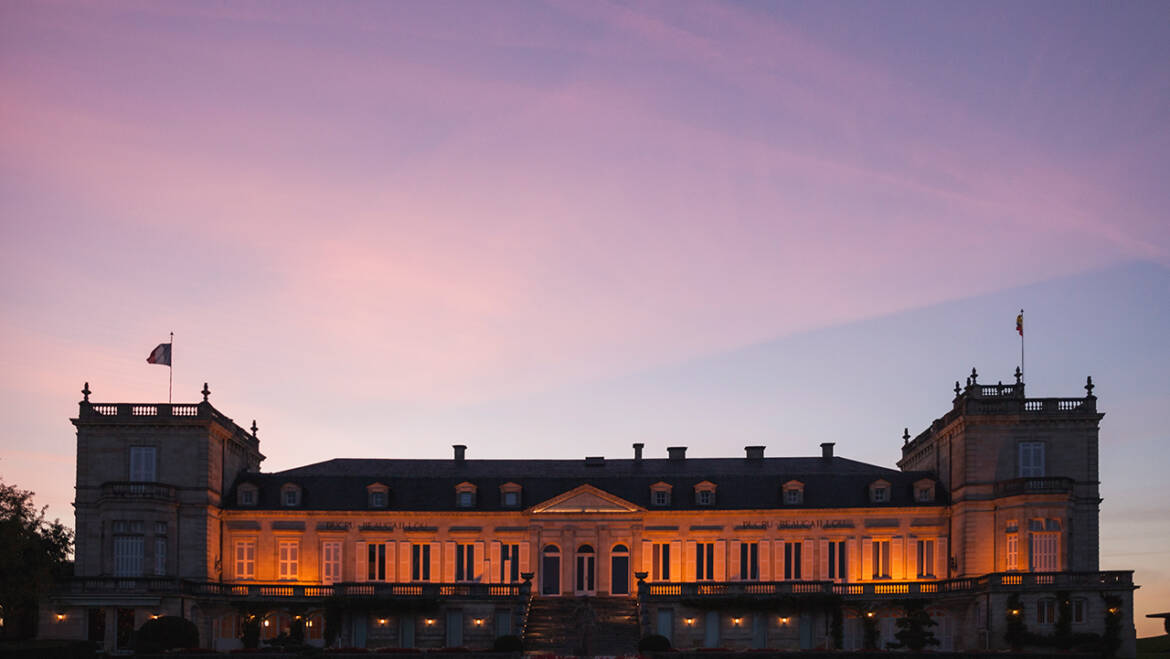 It was in 1942 that Francis Borie, already owner of a grand cru in neighbouring Pauillac, finally took the reins of this superb property, which has been under the expert and loving care of the Borie family ever since. Native of Béarn, dynamic merchant and founder of his own trading house, Bertrand Ducru had acquired the property in 1797. His love for the Médoc growth led him to make major investments in both the cellars and the vineyard. So much so that his successors decided to add his name to that of Beaucaillou. Consecration of the wine’s reputation came later with the 1855 classification : Château Ducru (Beaucaillou) was given a noble position on the second step of the Bordeaux podium.

Château Ducru-Beaucaillou is an estate at the top of its game, with a series of superb vintages perfectly illustrating the grand silky style of Saint-Julien. On these stony ridges, steeped in time, carved out by a primitive Gironde between Margaux to the south and Pauillac to the north, there is a concentration of prestigious estates. Despite the appellation’s small area (900 hectares), it boasts eleven classified growths. A cumulation of science and human values in one of the most highly regarded terroirs in the world. The best vineyards, slightly elevated, overlook the immense estuary (635 km2). The soils, essentially made up of gravel, marl and pebbles, give the wines of Saint-Julien an extraordinary elegance and breed. Wines of grace, silk and lace. Château Ducru-Beaucaillou owes its name to these “beautiful pebbles” called Gunz gravel, quartz pebbles swept in by the ancient Garonne at the beginning of the early Quaternary Period, probably almost two million years ago. These Gunz gravels gave rise to poor soils, forcing the plant to draw its nutrients at depth; in summer, the pebbles retain daytime heat and return it to the vines at night, to facilitate the ripening of the grapes. Another privilege of the Château Ducru-Beaucaillou terroir: its proximity to the estuary, the largest in Europe at 635 km2 and here more than three kilometres wide. On this exceptional site, the four daily tides stir up large bodies of water, mitigating harsh winters, moderating summer heatwaves, deflecting hail trajectories, and promoting good respiration. Every procedure in the vineyard is respectful of the entire ecosystem: herbicides have been abandoned in favour of mechanical weeding and judicious grass cover; chemical fertilisers replaced with manure and quality composts; insecticides with pheromones to fight against grapevine moths or kaolin clay to lure the green leafhopper. The estate also employs an ever more drastic selection policy so that only berries showing no defect are retained. The raw material must be flawless. The volume selected for the first wine of Ducru-Beaucaillou has been severely reduced (from 16,000 cases in 2002 to 8000 in recent vintages). Experimentation with a battery of oak vinification vats, and also new-generation (“smart”) conical stainless-steel tanks of small capacity (60/80 hectolitres), has made it possible to work with great accuracy and ultimately to express the identity of each plot and micro-plot. This accuracy is also found in the blends, made with a precision never reached before (down to less than 0.3% in the blend), remarkable for their purity, integrity and clarity. Ducru-Beaucaillou is one of the rare properties to opt for long ageing of 18 months, which confers refinement and guarantees better potential for ageing in the bottle. Exclusive use of new certified French oak barrels and a continuous search for the best possible oak integration. In order to accomplish this work, there are fifty pairs of hands, fifty manual tasks that follow one after another, behind each bottle of Ducru-Beaucaillou. In the end, it is an accumulation of care and attention to detail that makes a great cuvée.