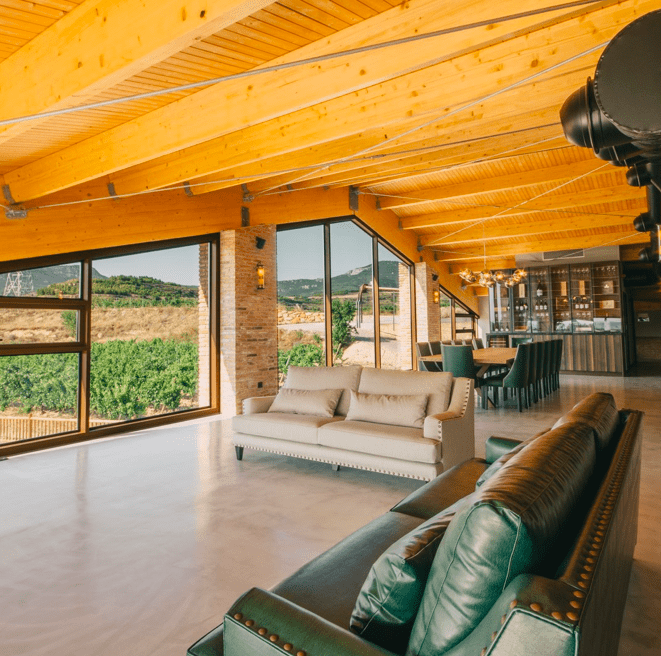 Located in the town of San Vicente de la Sonsierra, in the heart of Rioja Alta. BODEGA CARLOS MORO is a winemaking project led by the passion of a winegrower, oenologist and winemaker who has successfully made his mark in other equally demanding and prestigious designations of origin.
This exciting work is driven by a team of oenologists who are responsible for selecting a collection of excellent hamlets on the left bank of the Ebro River with its epicentre in San Vicente de la Sonsierra.
The winery has a 150-metre underground wine cave with a capacity for 2,000 barrels, which promotes a natural and homogeneous ageing in barrels.

More vertical systems which are gentler with the grapes have been selected thanks to the passion and viticultural knowledge of the winery’s entire winemaking team, including gravity-flow systems that facilitate both alcoholic fermentation processes and malolactic fermentations in high thermal inertia tanks, such as the classic concrete tanks.
This winery is the backbone between two communities, between two rivers (the Duero and the Ebro) that flow into the same destination, despite doing it in different directions: a market accustomed to wines with high standards and excellence. This is the Riojan winery’s main and noble aim, which is pursued with humility, simplicity and professionalism.

Carlos Moro is a winegrower and winery owner with a passion for wine, and love for the land and the vineyard. He spent his childhood among his family’s vineyards in Olivares and Valbuena de Duero, in the heart of the Ribera del Duero’s Golden Mile, a fertile soil for his distinct intuition for wine, his sense of duty and work well done, guided by an infinite love for the land. These vineyards laid the foundations of what Bodegas Familiares Matarromera is today.

Agronomist Carlos Moro was born during the vintage of 1953. In 1988, he decided to go back to his roots and make true his own dreams by founding Bodega Matarromera in Valbuena de Duero, followed by instant international recognition when he was awarded the Best Wine in the World award.