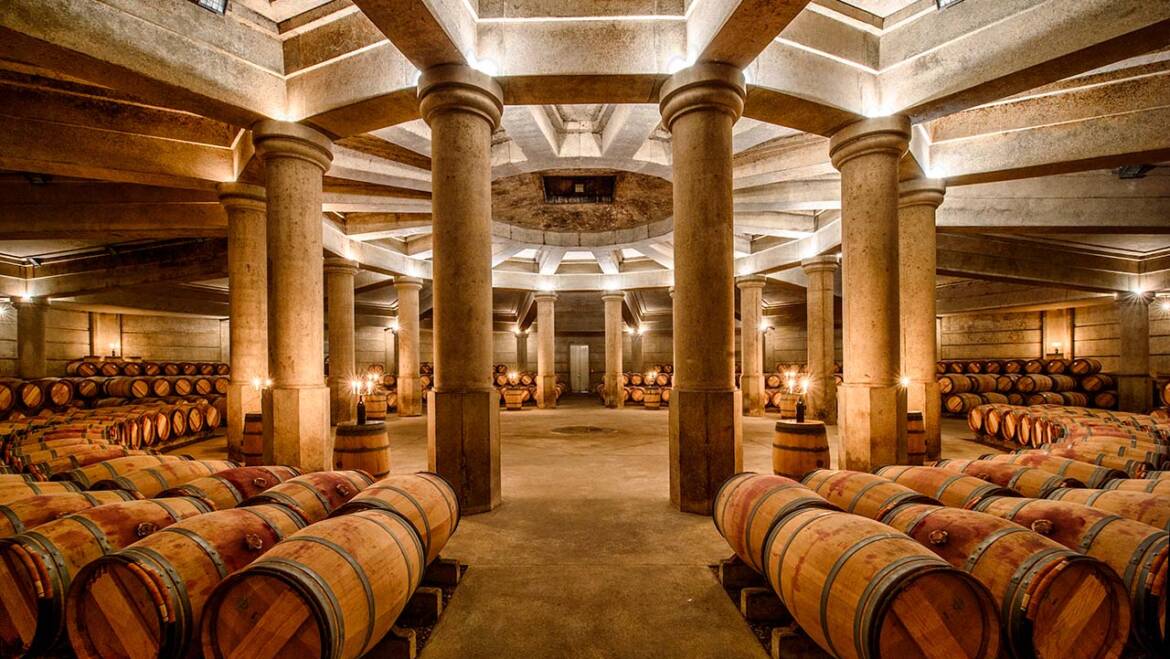 An entire book could be written about the history of this illustrious – and illuminating – estate.

Lafite’s mention as a medieval fief dates to the 14th century and there were probably already vineyards on the property at the time when the Ségur family organised the vineyard in the 17th century, and Lafite began to earn its reputation as a great winemaking estate. In 1695, Jacques de Ségur’s heir, Alexandre, married the heiress of Château Latour, who gave birth to Nicolas-Alexandre de Ségur. The wine histories of the fiefs of Lafite and Latour were thus joined at the outset.

From the early 18th century, Lafite found its market in London. Between 1732-1733, Robert Walpole, the Prime Minister, purchased a barrel of Lafite every three months. From 1716, Marquis Nicolas Alexandre de Ségur consolidated Lafite’s initial success. He improved the winemaking techniques and above all enhanced the prestige of fine wines in foreign markets and the Versailles court. He became known as “The Wine Prince”, and Lafite’s wine became “The King’s Wine”, with the support of an able ambassador, the Maréchal de Richelieu. In 1755, Maréchal de Richelieu was appointed Governor of Guyenne, and consulted a Bordeaux doctor, who advised him that Château Lafite was “the finest and most pleasant of all tonics.”

The Marquis did not have any sons, and his property was divided between his four daughters. Lafite was thus separated from Latour. Lafite was inherited by Count Nicolas Marie Alexandre de Ségur, the son of the Marquis’ oldest daughter. With outstanding debts, he was forced to sell Château Lafite in 1784. As a relative of the seller, Nicolas Pierre de Pichard, the first president of the Bordeaux Parliament, used the “kinship rights” legislation to purchase the estate.

On the eve of the French revolution, Lafite was at the height of its winemaking legacy. While serving as ambassador for the young United States Republic to the Versailles Court, Thomas Jefferson acquired a passion for winemaking and detailed the hierarchy of the Bordeaux growths, highlighting those that would go on to be the four leading wines. Château Lafite was among them.

The Ségur family’s stewardship of Lafite ended brutally with the execution of Nicolas Pierre de Pichard during the chapter of French history known as “the Terror”, on 30 June 1794. The purchaser, Jean de Witt, was a Dutch citizen, who was soon forced to sell. After Jean de Witt’s short ownership, Château Lafite hosted a remarkable line of stewards, whose greatest was Joseph Goudal. Goudal was masterful in his supervision of the estate in the early part of the 19th century. As of 1800, the three owners were Baron Jean Arend de Vos Van Steenvwyck, Othon Guillaume Jean Berg and Jean Goll de Franckenstein.

In 1818, the new owner of Lafite was Madame Barbe-Rosalie Lemaire, whose husband was Ignace-Joseph Vanlerberghe; after a half-century of secrecy, the name Vanlerberghe would be written into Lafite’s history of owners. In this period, vintages that made history include: 1795 and 1798, of outstanding quality, 1801, 1802, 1814, 1815 and especially 1818.

The vintage rankings of the Universal Paris Exposition in 1855 officially gave Lafite the rating as “Leader among fine wines”. This ranking would be the benchmark for a new and astonishing era of success for Médoc vineyards. The period’s finest vintages include 1847, 1848, 1858, 1864, 1869, 1870 and 1876. On 8 August 1868, Baron James de Rothschild purchased Château Lafite, which then became the joint property of his three sons: Alphonse, Gustave and Edmond. The estate then boasted 74 hectares of vineyards. As a sign welcoming the new owner, the vintage produced in 1868 went down as a record on several counts: it was the highest priced wine of its vintage year (6,250 of that period’s francs, or 4,700 of today’s euros the ‘tonneau’ of 900 litres).

The end of the 19th century and the first half of the 20th century were turbulent. The phylloxera crisis and mildew severely impacted the vineyard. Then came World War I and the Great Depression which led to a freefall in prices. Suffering heavily from mildew, Château Lafite Rothschild took measures and declassified certain vintages from 1882 to 1886, and also 1910 and 1915. Bottling at the Château was also implemented for more effective combating of fraud. A few exceptions to this dark period include 1899, 1900, 1906, then 1926 and 1929, which are of excellent quality.

World War II caused an ordeal in a different league, with the June 1940 defeat leading to the occupation of the Médoc. A German garrison was stationed for the entire length of the occupation at Château Lafite Rothschild and Château Mouton Rothschild. The Rothschild family properties were confiscated and placed under public administration. The Barons de Rothschild recovered possession of Château Lafite Rothschild at the end of 1945, and Baron Elie was responsible for re-establishing the estate’s successful operation. A series of excellent vintages in 1945, 1947, and 1949 gave strength to the reconstruction effort.

The very fine 1955 vintage was evidence of the wine’s rebirth, but the Bordeaux vineyard suffered terrible frosts in February of 1956 before producing a new cycle of exceptional vintages in 1959 and 1961. The 1960s rounded out the renaissance with new markets, particularly in the United States. Prices rose, due in part to a healthy rivalry between Château Lafite Rothschild and Château Mouton Rothschild.

The vineyard consists of three main areas: the hillsides around the Château, the adjacent Carruades plateau to the west, and 4.5 hectares in neighbouring Saint Estèphe. The vineyard covers 112 hectares and is well-drained and well-exposed, with soil made up of fine deep gravel, mixed with aeolian sand on a subsoil of tertiary limestone. It is well-drained and well-exposed to the sun. The grape varieties are Cabernet Sauvignon (70%), Merlot (25%), Cabernet Franc (3%) and Petit Verdot (2%). The average age of the grapevines is 39 years old, but it should be noted that vines younger than 10 years old are not used in the Grand Vin. This means that the average age of the vines used in the Grand Vin (Château Lafite Rothschild) is closer to 45 years. The oldest plot, called “La Gravière , was planted in 1886.

The property has been managed since 1962 by a single team that, due to the proximity of the two properties, oversees both Château Lafite Rothschild and Château Duhart-Milon. Eric Kohler, Technical Director of Château Lafite Rothschild and Château Duhart-Milon, is assisted by oenologist and winemaker Christophe Congé, and vineyard manager Louis Caillard.

Both châteaux use exactly the same traditional techniques, based on strict control of yields, manual harvests, and numerous tasks that are carried out by hand all through the year. Little or no chemical fertilizers are used, and careful use of natural fertilizers allow the vines to reach an advanced age, they are generally pulled out (with a heavy heart) when they reach 80 years old.

The grapes from each plot are fermented in separate vats in order to preserve the identity of the terroir on which the grapes have ripened. Fermentation takes place in two vat rooms: one with traditional large oak vats, and the other with modern stainless steel vats, with integrated cooling/heating rings and automated centralized temperature control.

Upon completion of alcoholic fermentation, the cuvée-wines are tasted before being drawn off to the fine wine vats. The free run juice and the pomace are separated and the pomace is pressed independently in order to extract the “press wine”. A second fermentation phase, called malolactic fermentation, takes place in vats before the wine is transferred into barrels by batches.

In 2010, Lafite further refined its vinification procedures with the construction of two vat rooms consisting of several dozen smaller-sized vats. A Merlot vat room (with concrete tanks ranging from 50 to 125 hl) in order to make wine with an extra level of care from all the various plots of Merlot. A divisional vat room (with stainless steel vats ranging from 30 to 70 hl) dedicated to malolactic fermentation (secondary fermentation) in order to continue plot selection all the way through the vinification process for any batches of Cabernet or Merlot that require it.

All of the barrels come from the Domaines cooperage, with a special “toasting” during manufacturing suited to the characteristics of the wine. Several tastings from each vat are carried out to make the selection for the Grand Vin. Blending takes place after the first racking of the barrels in March. Then the ageing phase of the wine begins in the cellar, which takes between 18 and 20 months. During this period, the cellar master racks the wines regularly in order to clarify them. Four to six lightly beaten egg whites are added to each barrel, which absorb floating particles and pull them down to the bottom of the barrel. The wine is then ready for bottling, which takes place in June.

Château Lafite’s circular cellar room was constructed under the supervision of the architect Ricardo Bofill and inaugurated in 1987. Intended for the ageing of wines in their second year, it is characterized by its unusual octagonal shape and an arch supported by 16 columns. It can accommodate up to 2,200 barrels.