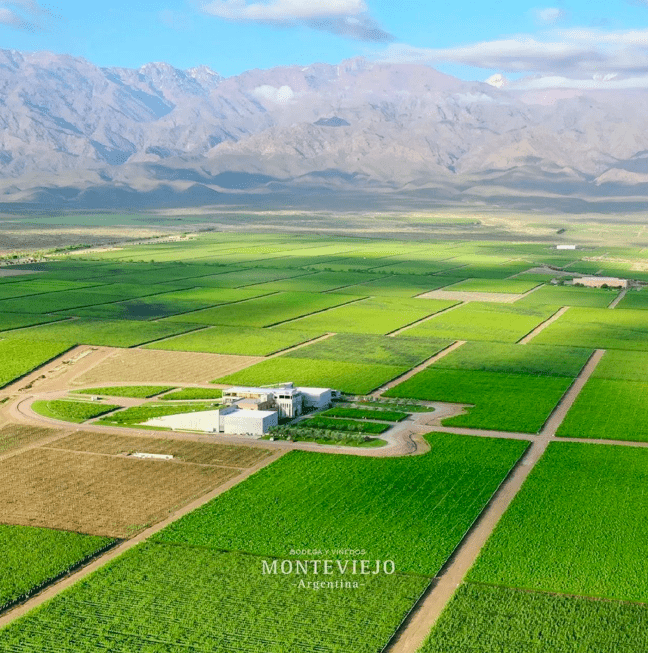 Monteviejo winery is situated at the foot of the Andes mountains in the heart of the Uco Valley. One of the most important wine regions in Argentina, it is 120kms from Mendoza city in Vista Flores, Tunuyán, located within the Clos de los Siete group of wine properties. The property spans 130 hectares with altitudes between 1000 and 1200 meters above sea level. The land has northern and eastern facing slopes, giving them a good exposure to the Southern Hemisphere sun.

The first harvest was in 2002. The state of the art winery, developed by Catherine Péré-Vergé, the owner, is known for being one of the most ambitious Argentinean projects. Finally deciding on a particular area of land to cultivate the goal; to create wines that can compete with the world’s best. Péré-Vergé had taken charge of Cristal D’Arques International with her brother and sisters after the death of her father; subsequently, she started to invest in the wine business in 1985, buying Château Montviel in Pomerol. Then in the decade of the 90’s, she invested in Château La Gravière, Lalande de Pomerol, Chateau Le Gay in Pomerol, and also started a brand new project in Argentina – Bodega Monteviejo.

Yields at the estate are kept low and the vineyards are vertically trained, with vines planted at a density of 5,500 vines per hectare. This configuration corresponds to the region’s traditional method of planting old vine Malbec. Péré-Vergé’s friend Michel Rolland, who made his fame as a consultant for boutique wineries around the world, is in charge of the operations at Bodega with Marcelo Peleritti managing the winery. The wines are a true expression of their variety, with focus on the production of Malbec and Torrontés.