“The youthful, well-trained Romain Cornin is undoubtedly a winemaker to keep an eye on” - Tim Atkin

Romain Cornin has winemakers' hands. Long fingers, square fingertips; deft. These are fourth generation winemakers' hands, hands which are now in charge of the glorious, rich yet ridiculously unknown family estate, Domaine Dominique Cornin, in the village of Chaintré, in the appellation of Pouilly Fuissé, Burgundy. The domaine was handed to Romain by his father Dominique in 2012, over 100 years after Romain's great-grandfather and grandfather first began planting vines.

Back then, the farming was polyculture and the family worked under the métayage system, whereby they didn't own their land but instead leased it and could keep half of whatever crop they harvested. Realising there was something special about the soils they were working, they began to plant more and more to vine, with much of their Pouilly-Fuissé vines being planted around 1930. Many of these vines are still in healthy production now, meaning that Romain is the custodian of simply fabulous quality fruit, much of it from plants between 80 and 100 years old. The Domaine was established in its own right in 1993.

One of the reasons the estate, as fabulous as its wines are, is not more well known is the sheer fact of the appellation. Pouilly-Fuissé itself flies under the radar by virtue of having had no premiers crus - but all that is about to change.

The Maconnais where Pouilly-Fuissé is situated is a surprising patchwork of rolling hills (contrast with the "classic" picture of Burgundy such as Beaune which is essentially a single slope). Thanks to these bucolic hills, the land is made up of a palimpsest of many different soils and expositions, which makes Pouilly-Fuissé a really, really interesting place indeed. So why no premier cru classification? Since 1936 there has been no classification of premier cru in France... and what is significant about this date? During the second world war, the occupying Germans were allowed to help themselves to any wine they liked - except that for premiers and grands crus they had to pay a small fee. To discourage this acquisitiveness, vignerons quickly started applying for premier and grand cru status left, right and centre (after the war, some declassified, but some didn't; hence Montagny being 80% premier cru...).

Because Pouilly-Fuissé was in the free zone, they were not occupied, their wines were safe from being taken, and so they didn't need to apply for premier cru classification. However, over the years it became clear that some of the terroir in this appellation punches way above premier cru status, and in 2007 the long process was begun to classify the relevant vineyards.

In 2020 Domaine Cornin harvests its first premier cru classified grapes. They have always labelled their wines with the single vineyard names, to be precise about the soils each wine came from, since they have been aware, since Romain's grandfather's time, that each site was special and different from the others. Now the exceptional quality of their vineyards will be officially recognised.

The family's own story is no less compelling; it's one of sheer hard work, and finely tuned, almost clairvoyant instinct for the potential of the magical terroir that was in their hands. As we know, Romain's great-grandfather realised the quality of the land he was farming, and began to plant vines. For around 80 years the family was part of a co-operative until 1993, when Romain's father was the first to leave and start producing his own wine. In 1996 he sold his harvest machine (imagine what a stir that must have caused with the neighbours...) and began to harvest by hand. In 1998 he ceased to use herbicides, and in 2000 started biodynamics. Since 2003 the entire estate has been biodynamic, and in 2009 they received their organic certification. While this was happening, young Romain was beginning to cultivate his own education, feeling and experience in wine. He took himself overseas to study, spending 2011 at Felton Road, New Zealand, and harvesting at Dry River, Oregon. When he returned, his father placed absolute trust in him, handing him the keys to the family heritage and allowing him to flourish. The family also do some work for Hospices de Beaune in the Pouilly-Fuissé area. They were hired by Les Hospices de Beaune in 1995 to look after their métayer vineyards, learning new techniques from this partnership. The family's great friends include Jean Thevenot at Domaine de la Bongran, and Pierrette et Luc Guillemot-Michel, with whom they share wine-making philosophy and techniques.

The individual vineyards of this domaine are an apt reflection of the Cornin family. Each parcel carries a part of the family’s history in the Mâconnais. Les Chevrières is the plot Dominique’s grandfather – Romain’s great-grandfather - planted more than 50 years ago, and the 100-year-old parcel in Les Serreuxdières reaches even deeper into the Cornins’ roots in Mâcon.

Overall in the Pouilly-Fuissé appellation, there is a lot of limestone from the Alps, but towards the edge where it meets Beaujolais, the soils are also sandy with some granite where we hit the foothills of the Massif Centrale, and some schist. In a word: a delicious mix.

Les Plessys found at the top of the slope, has more clay, thus darker soil, with yellow stones, giving it more body than Les Chevrières. The limestone is deeper than in Les Chevrières, around 4-5m. Although the quality of this vineyard with its excellent exposition is easily good enough for premier cru classification, because only two producers use this single vineyard name, the powers that be, perhaps short-sightedly, decided it is not recognisable enough as a premier cru.

Planted by Romain's great grandfather 55-60 years old in their home village of Chaintré, this is the vineyard that will be classified premier cru in 2020. Les Chevrières is red soil, thanks to its iron content; it is startlingly different from Les Plessys, even though it lies only 4-5k distant. The topsoil is very thin, just 10-15cm, followed by limestone which is very very fine, very strong limestone but the strata being in thin slices through which the roots of the vines can penetrate. This vineyard is unique because there is no clay, and it produces wines which are very fine, with beautiful finesse. To preserve the finesse of these wines, Romain does not use too much oak to raise them: he uses old oak for fermentation, 600l barrels (ie demi miud) then the wines spend two years on fine lees, with no fining, no filtration.

This is a single vineyard in Chaintré with astonishingly old vines, some over 100 years of age, planted by Romain's great-grandfather and tended by his grandfather then father, and now of course today by Romain himself - meaning that no fewer than four generations' work goes into the wines created from this ancient site. The same single vineyard is named in two different appellations because the wines are created from vines growing on different parts of the slope.

The credo at the Domaine is as little intervention as possible. In the vineyard the vines have been worked manually since 1998, with all chemicals proscribed since then; biodynamic farming has been practised for the whole domaine since 2003. In the winery, chemicals are similarly proscribed; fermentation begins naturally with indigenous yeasts. The wines are certified organic, and produced according to biodynamic principles, although they choose not to have the Demeter certification. Vines are sloughed by horse, every single grape is hand harvested. The grapes go through a very gentle pressing and recently the family purchased a second press so they can harvest faster, when the grapes are at optimal ripeness. Romain makes sure his wines always go through MLF because this stabilises them naturally, meaning he does not have to use as much sulphur. They just add a tiny amount of sulfites.

The single vineyard Pouilly-Fuissés, are fermented and raised for one year on the fine lees in 228l futs; the wines are then racked to tank where they spend a second year before bottling. 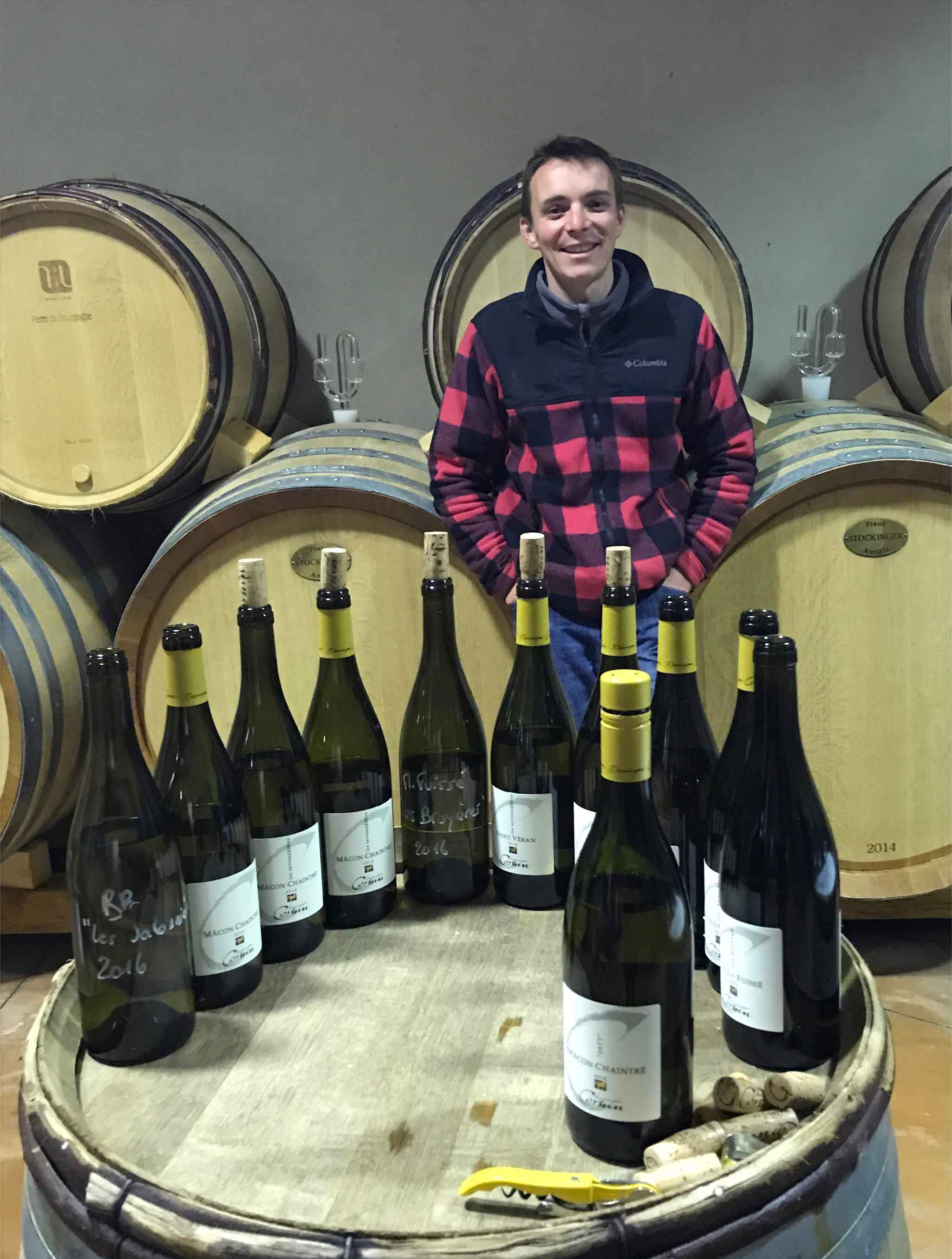