Domenico Clerico – who sadly passed away recently – was considered an elder statesman for Piedmont. When he took over his father’s small estate in the late 1970s, he was labelled a ‘modernist’ for introducing ageing in 228-litre Burgundian pieces, however with his longer macerations, averaging 18-23 days, he bridged the gap with the more traditional ways of producing Barolo.

Despite the focus on his winemaking methods, Clerico’s first love was his vines, and as time went on he spent more and more time in the vineyards.

The small estate is situated in Monforte d’Alba, right in the heart of Barolo. Domenico’s father established this farm to grow grapes to sell to the local co-operative and in 1976, asked Domenico to take the reins; Domenico took the big decision to make his own wine, concentrating his efforts on single-vineyard expressions. He made the savvy purchase in 1977 of a small plot in the heart of "Bussia", followed later by two vineyards in the "Ginestra" cru, then a piece of land in "Mosconi", where Barolo "Percristina" began. Today the estate consists of approximately 21 hectares. New barrels constitute between 20 and 30 percent of his cooperage; Arte is the only wine in the portfolio that is aged exclusively in new barrique. Yet Clerico regarded production techniques as mere tools of the trade as opposed to intrinsic components of the wine itself; his efforts in the vineyard were based on a relentless pursuit of quality, and his average yields among the lowest in the region. Perhaps there’s no better testament to Clerico’s meticulous approach to viticulture than the sign that directs vintners to his cellar door—Domenico Clerico, Viticoltore. 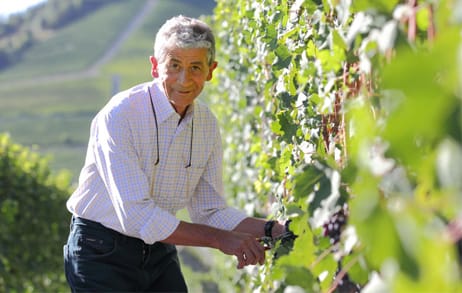