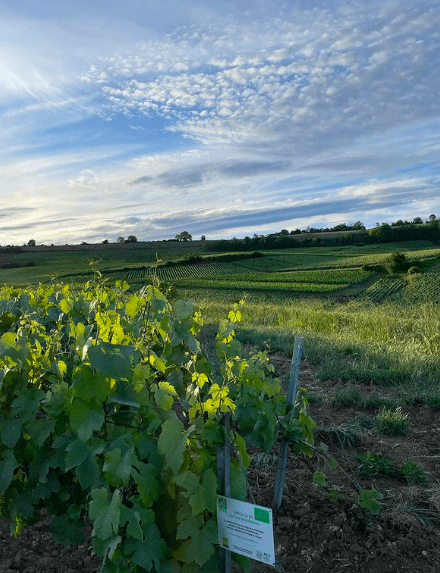 Henri Blin, along with most of the champagne producers in Vincelles, comes from a long line of vintners, many generations stretching back to the 17th century. But it was not until 1947 when he united 29 growers in Vincelles to found Champagne H. Blin. So Champagne H. Blin is a union of vintners – the Vincelles Cooperative. Currently, H.BLIN is the only cooperative vintners’ union to produce and market organic champagne under their own label.

The house is located in the charming old village of Vincelles in Marne Valley (25 minutes west of Epernay and Reims), where even the village name gives a clue about its winemaking heritage: “Vini cella” is Latin for wine cellar. The 110 hectares of vines, farmed by 115 growers, are predominantly Pinot Meunier (70%) – the historic local grape variety. Chardonnay (16%) and Pinot Noir (14%) make up the rest of the plantings… plus a plot of Petit Meslier, an ancient variety.

Champagne H. Blin and its growers have long been committed to sustainable farming, with a focus on environmental protection. 70% of plots have the sustainable VDC label while 12ha obtained organic certification in 2013.

Production is around 500,000 bottles every year, from brut NV to single varietal 100% Pinot Meunier to organic single vineyard expressions; half of these are exported to 30 countries and the other half remain in France.
Simon BLIN, the current President of Champagne H.BLIN (since 2009) and grandson of Henri BLIN, is the 12th generation of growers in Vincelles and the proud heir of a long family tradition (going all the way back to Jacques BLIN, born in 1636). He maintains the family’s determination to promote Pinot Meunier, growing, tending, harvesting, and marketing the grape and its illustrious wine.